I was checking Facebook tonight when I noticed a friend posted this: 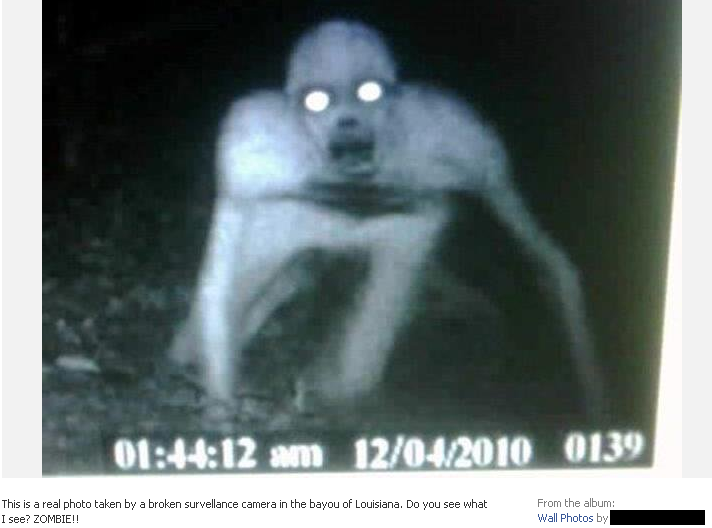 It's the Internet's latest viral sensation, which has now made it's way onto news programs, gaining nation-wide attention.

So, I set to work to try to get to the bottom of it, posting the photo on a popular discussion board.

I was quickly linked to the following spooky video, which, remarkably, seems to capture the same creature:


Not one to be easily swayed, however, I ignored this and continued on my quest for the truth.

The first real explanation I came upon, was that it was a viral marketing campaign by Insomniac Games, to promote their new PS3 game, Resistance 3. Feeling that the game developer's tongue-in-cheek Twitter posting was proof enough: 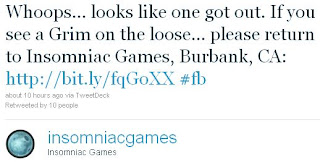 However, this did not satisfy me as adequate proof of responsibility, and the creature in the pic didn't look much like a Grim, so I kept digging.

Similarly, others believed that it was instead a viral marketing campaign for the upcoming movie Super 8, but their proof was extremely weak, claiming that "inside sources close to the production" had confirmed it, and linking a video of a young girl describing her scene in which she was "blocked by a wall, and there was a zombie coming towards us":

Checking comments on various news sites, I was finally led to what appears to be the source of the picture, a thread on a hunting forum, ArcheryTalk.com: 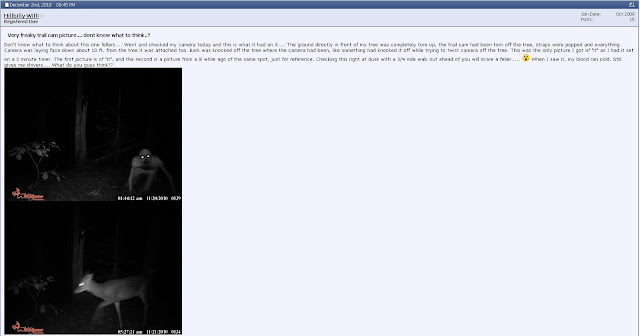 (Click to enlarge)
You have to register to see the pictures, but I've uploaded all the relevant photos here, so you don't have to!
First of all, notice that the thread was started on December 2nd, and the timestamp on the posted photograph is 11/30/2010, whereas the photo being spread like wildfire in the media reads 12/04/2010.

This forum user, Hillbilly Willi, claims to be the camera owner, and therefore the source of this viral image. I'm inclined to believe him, as several days later he produces three additional pictures from the same camera: 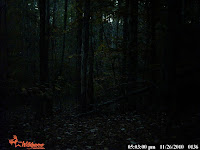 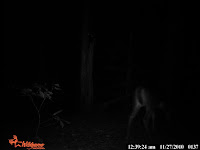 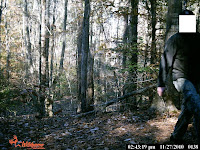 Hillbilly Willi adamantly claims the images are real, and that he is telling the truth, but goes on to say:
"I'm not a very superstitious guy, so I have a hard time believing its real...... But until one of the two buddies fesses up on the prank, I'm gonna be pretty uneasy walking out to the stand in the dark...."
The thread has over 700 replies, spanning 18 pages. Continue on to pages 16 and 17, and it appears that some of the more savvy forum members have already gotten to the bottom of this little conundrum...
First, we have this astute observation:
"LOL...you guys are funny! look at the little tree (Bush) to the left...the image with the deer is supposed to be 9 days diff than that of the boogyman...yes in both images all the leaves are exactly the same...wind has not moved them at all or even ruffled them. case close...you can all put away your security blankets." 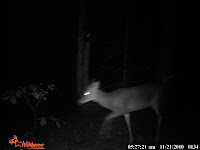 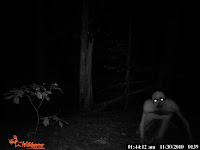 Further, if you use a file decoding program, such as JPEGsnoop, you can view the hidden EXIF data that is contained in almost every image, revealing such detailed information as the type of camera used, the time, and even location that the image was taken from. Do so for the images at hand, and you get the following results: 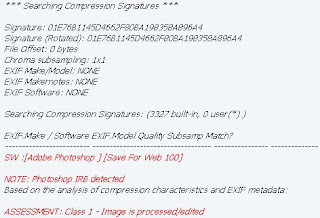 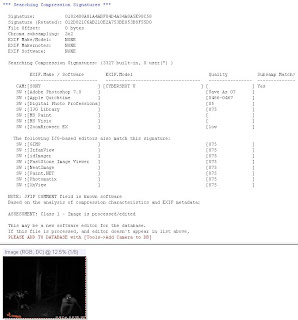 Need more proof? Another user goes on to state the following.
"Download both pictures, although EXIF data is missing from both pictures you can clearly tell the mystery photo was manipulated as it's pixel size is different.

Digital cameras at a given resolution always capture the same size image. The file size may vary given JPEG compression but the image size should be a constant in pixels.

Next up, pull the photos into an editor, use the curves tool to blow up exposure. Notice around the head of the 'boogey man' has a black blur around it? That's a blending job at work in photoshop. See how the deer doesn't have that going on." 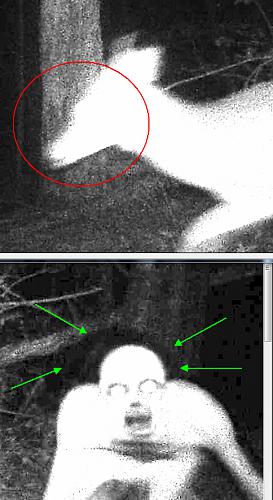 While it was certainly fun to believe that such a horrendous monster could exist out there in the deep dark woods, I think it's safe to say this little mystery is debunked. :)
Thanks for reading!
Posted by Jov West at 9:47 PM

You are visitor number: